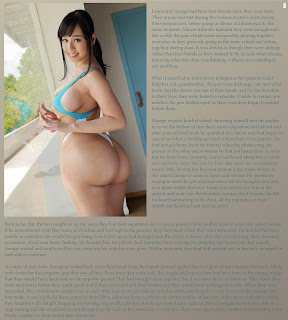 Sometimes love takes a while to come about


Hope everyone is having a good weekend so far! Today should be busy for me with any number of chores and such to attend to as well as getting ready for another week of university life. That and I have to start making more caps since I've now run out of my pre made stock! Oo oh!

Anyways, when I came across this picture, I could see the story forming already, and it didn't take me that long to write it in the end. Hope you like how it turned out!

Thanks to Ambyr and Ian for their comments on yesterday's caption :) I'm happy you liked how that different style of cap turned out :)
Posted by Kara Elissa at 12:26 10 comments: 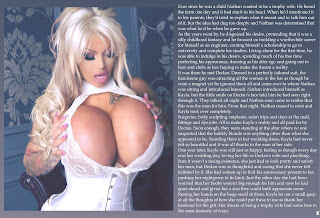 Everyone wants something different out of life.


Wanted to try something a bit different from my normal fare here at the site. This theme is not one I have explored really before (except for specific ones on other sites) and its one I tend to stay away from for a couple of reasons, partly because its one you see a lot of (which was one reason why I started the blog, to create the sort of captions I wanted to see), its also not a theme I particularly enjoy, and its one of the TG/TF themes that seem to be a staple of the community. Why, well there's probably a lot of reasons to explain that, but hey, not a psychologist!

Still I wanted to give it a try and when I saw the image, well the idea popped into my head. What do you guys think of the end result? 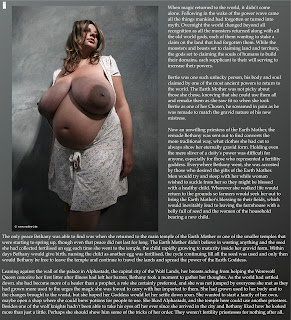 When the gods chose you, you have no choice but to submit to their whims.

Sorry about the size (and wall of) text in this cap, the story managed to run away from me again!

Only realised I didn't upload a cap yesterday when I woke up this morning, so sorry about that everyone! Got absorbed by fencing training, the pub after that and getting throughly hooked on watching Jonathan Strange and Mr Norell, which is a really good series! Its given me a few ideas of how to progress a Steampunk story I was stuck on too, which always helps!

So hope everyone enjoys this caption and more on its way tomorrow! Now if you'll excuse me, I really need to get down to watching more of…. umm I mean completing the calculations for my Biochemistry class tomorrow morning. Yeah….


Thanks to Drew Night and Kronostar for their comments :)
Posted by Kara Elissa at 13:23 2 comments: 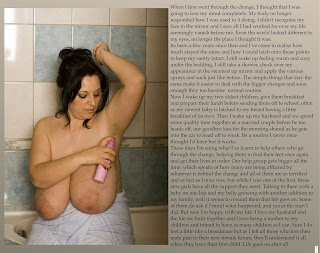 
Proof I should never snack late at night or go back to sleep after waking up during the night. Thought I was bloody losing my mind this morning after a series of really weird dreams and noises, including some freaky fucking giggling that seemed to get louder and closer. Not fun. I was quite happy to get up and head off to my three hour long microbiology lecture!
Posted by Kara Elissa at 13:37 3 comments: 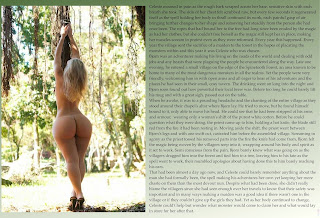 This is why adventurers have such a hard time dealing with villagers. Well apart from the whole angry mob and pitchforks bit….


Uhhhh mondays. Lectures and lab time from 9 till 5. Well at least its been interesting so far this semester, here's hoping it keeps up! That, and I just spent the last hour and a half in the pub drinking a couple of pints, eating a rather nice piece of steak and reading a book on the American Civil War. You know because that really applies to my Biomedical Science course!! Anyhoo, caps will tend to arrive late on Mondays as a result of my time in uni, so don't panic (reach for your towel and a copy of the Hitchhikers Guide to the Galaxy (couldn't resist!) ) and I'll make sure they come along so long as I have pieces to upload!

Thanks to Ogrenix, Ambyr, Ian and Mark Sherwin for their comments on the last cap :) I hope I can continue to bring good stories to you all over the coming weeks and months :) 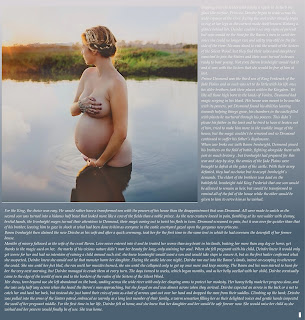 Earning your freedom is never easy.

Sorry about the small size of the text (and the sheer abundance of it!) the story got away from me very quickly!

Well would you believe it, I actually Can't play XCom 2  at the moment. I have to upgrade my operating system to the latest version and honestly, since anything made by Apple (especially these days) is as buggy as crap for about the first six versions, I don't want to upgrade, especially as its my main computer where not only do I make all the stuff for this site, but do all my university work on and I can't be bothered trying to face the hassle of it all fucking up. Oh well, it will be played, but probably the same way I was forced to play the first one. Many months later.

In other random news, I'm on my 14th book so far this year. Currently reading 'Time of Contempt' by Andrzej Sapkowski. This is part of the series that the Witcher video games come from and they are a bloody good set of books, some of the best fantasy stuff I've read, kinda like the Metro 2033 of fantasy, but without the weird moralising, philosophy and psychological threats that marked that particular series. If you liked the game, you'll love the books, and if you haven't tried either, get out there and do it! I would say play the games from the start, but the first two are PC only and the first one has quite a difficult set of mechanics to work through, like most of the older RPGs out there. Witcher 3 is probably the best for gameplay, but you'll miss out on some fantastic stories if you just dive into that one!

Thanks to Ogrenix and Funfun74 for their comments. Good luck with the resistance, I'll see you on the battlefield soon!
Posted by Kara Elissa at 12:03 8 comments: 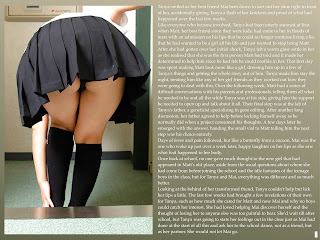 The most extreme situations can sometimes show you things you never thought, but always needed.


XCOM 2 day yay!!! Here's hoping my computer can run it! If it can, you lovely lot might yet appear as members of the squad ;)

So I couldn't sleep well last night and ended up reading what is rapidly becoming one of my all time favourite books. Dare, Truth or Promise by Paula Boock is a story of two teenage girls who meet quite normally but are both struck for one another immediately. I won't spoil it, but its sweet and romantic all the way through :) I find it so compelling whenever I pick it up that I tend to read it cover to cover without putting it down! I really recommend you guys reading it if you get the chance. Its also the twelfth book I've read so far this year. Hmmmm maybe I should make a cap about that? Not sure how Shakespeare or Oberon would take the corruption of my initial thought on the plot for it though!!

Thanks to Kronostar for the comment :)
Posted by Kara Elissa at 14:34 3 comments: 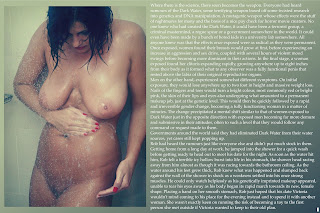 Taking a shower will never be the same again

Thanks to kronostar for the comment :)
Posted by Kara Elissa at 14:11 2 comments:

Taken for a New Role 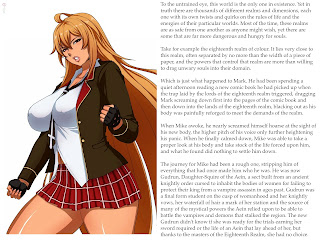 Beware what lies beyond.

Hey everyone! I know anime image captions are not a big feature of this site, but when I saw this image the idea just popped into my head and I had to create it! I'm actually really happy how it turned out so I hope you enjoy it :)

You should get a cap from me tomorrow, but if not, then its because I was too tired to get up and sit at my computer! I've got a fencing contest to go to today and because there aren't enough of us going, I have to fight with all three swords! Sabre, Epee and Foil and three bouts of each. This is going to be exhausting!

So hope to see you all tomorrow, but if not, then I'll do a double feature on Friday!

Thanks to Kronostar  and Ambyr for their comments :)
Posted by Kara Elissa at 09:58 2 comments: 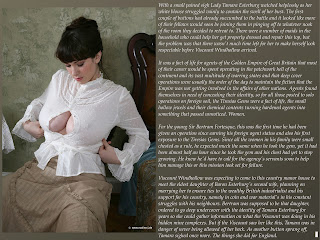 What you have to do for Queen and Country…


Hey folks! So this cap is part of my Steampunk universe I created first over at Rachel's Haven and I'm steadily expanded on, including some long story pieces and such (that are taking ages to write!), and spawned from my earlier cap 'The Man in the Whale Bone Corset'. So I'm thinking about making this more of a series/feature with the British Intelligence Agency and their use of metamorphic stuff, and well I'm just corrupting spy novel titles to make them fit!

Anyway enough of my rambling, hope you enjoy the cap!

Places To Find More Of My Work